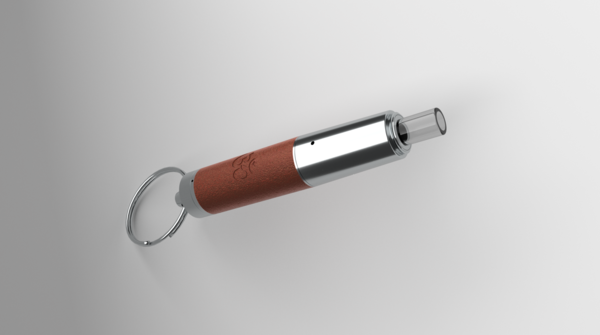 510 thread vapes are the norm in all forms of e-cigarette use. It has its origins in early vape pen technology, but it can now be used to vape cannabis oil. A 510 thread battery is required to power the atomizer, which heats your oil, whether you’re vaping THC oil, delta 8 carts, or CBD oil cartridges.

Modern 510 thread vapes provide additional benefits and features that appeal to oil vapers, and often include a bigger battery capacity than the traditional marijuana pen, although not as large as a portable cannabis vaporizer.

The PCKT One Plus is a 510 atomizer that is machined from a single piece of metal, making it durable. The gadget features a 660 mAh battery and three heat settings that are suitable for vaporizing THC and CBD oil cartridges. A magnetic gold adaptor is included so you can easily insert your cartridges. 510-threaded vaporizer with premium components.

With the Kandypens Special-K Black you’ll be able to smoke pot discreetly and stylishly. In addition to the two 1 mL tanks and three heat settings provided by the temperature control battery, this kit includes a number of useful extras. When it comes to pens, nothing beats the Special-K Black.

The Compass is a small, strong, and extremely comfortable tool for any task. Three power options allow it to operate at various voltages, from 2.8 to 3.6 volts. 510 thread oil carts work with this gadget since it charges through USB-C. The ventilation is precisely correct, and your cartridges are protected at the same time.

A regular 510 thread battery isn’t what the Vessel is all about. It’s available in a broad range of opulent styles. The Vessel’s 240 mAh battery has three power settings and is compatible with most 510 threaded oil cartridges. In order to charge the device, you may either use the included magnetic USB cable or buy a charging station separately.

With a simple press of a button, the Flip Ultra oil vape flies open. A 650 mAh battery powers a colorful screen that shows voltage, battery life, and puff count. 2.7 to 4.8 volts may be set on the Flip Ultra, which can be charged through micro USB or lightning and works with the majority of oil carts.

It is compatible with the Hypnos Zero atomizer and the vast majority of 510 oil cartridges. It contains a 650 mAh battery that is both small and strong. In addition to stainless steel and iridescent steel, the Hypnos is available. Although it resembles the original eGo battery, it is built with superior components.

510 oil tanks are compatible with Kandypens C-Box Pro. The tank simply slides into place thanks to the magnetic adapters it employs. Despite its hefty 390 mAh battery, the gadget is merely 3 inches tall and weighs less than a pound. The C-Box Pro can be charged through micro USB and has four voltage settings ranging from 0.4 to 4.0 volts.

According to Joyetech, a company that makes a popular vape pen battery, “510 thread” was initially coined by them. The ten 0.5 mm threads on tanks that are compatible with these pens were the inspiration for the name. Even though it is widely accepted nowadays, it doesn’t absolutely need to have ten threads in order to be 510 compliant.

Vaporizers and tanks with 510 threading are often referred to as 510 threaded devices, which is the industry standard. These days, most folks who mention a 510 thread battery are referring to the kind designed to work with oil cartridges.

A 510 thread vape is a word that refers to both the device itself and the tank that goes with it. In the context of cartridges, the phrase “510 thread battery” refers to the power source. Pre-filled with cannabis oil, oil cartridges are little vape tanks that are easy to carry along. Empty cartridges may be purchased to be filled with your own CBD vape juice or any liquid of your choice.

It used to be that 510 batteries were shaped like pens, but recently they’ve started to look more like small vape mods. Let’s have a look at the many varieties of 510 vapes now on the market and their differences.

In the early days of e-cigarettes, many of the tanks were powered by eGo-style batteries. Dual-threaded atomizers may be used with both eGo-style and 510 atomizers. To activate the LED lights on the tip of an eGo battery, press the battery’s firing button. However, some newer models may include built-in USB charging connections, which are used to power the devices.

The first thin and light 510 batteries were about the same width as a typical oil cartridge. You don’t have to press a button to vape with most of them, since they are draw triggered. Some people use buttons to control their devices. The LED lights on many of these devices come on when you start vaping. These devices were initially charged via eGo pens’ chargers, although many current variants have USB connections built in. It’s possible that certain models include the ability to adjust the voltage, as well as a preheating option that uses low voltage pulses to gradually warm your oil.

It’s the latest form of 510 thread batteries that resembles the pocketable version of a vape mod, but they are lighter and smaller. They feature standard 510 threads and occasionally use magnetic adapters that allow you to simply insert your cartridges. You may obtain a more potent impact by cranking up the voltage, which is available on certain models with a firing button and changeable voltage settings.

Keychain type batteries bring a new degree of subtlety to the table. To activate the connection, you just click the button on the side of the device. Some of them seem like key chains, while others look like ordinary FOB keys.

E-pipes — There are certain batteries with 510 threads that look like pipes. Classic styling that mimics the experience of smoking a bowl is a hallmark of this piece. Almost all of them include magnetic adapters, so you can just pop in a new cartridge.

It’s possible to use oil cartridges in several common vape mods. It’s essential that they have a 510 connection that enables air to flow through the bottom. Several modifications, like as the Eleaf Pico, are capable of supporting this form of bottom airflow.

This kind of battery has certain notable benefits over traditional pen-style batteries. They have a longer battery life and are smaller and more discrete than their larger counterparts. Some of them even use LED and LCD technology that is more sophisticated.

510 vapes are popular for oil since they are small, light, and simple to use. As a further benefit, the wide range of atomizers that can be used in conjunction with 510 vapes is another. A strong connection is also expected from a decent 510 thread battery.

Vaporizing using a cartridge on a 510 thread vape is a cinch. If you’re having trouble finding the right dose, start off slowly and work your way up to a larger one. When utilizing cartridges with 510 batteries, there are certain things to bear in mind.

It is possible that silica wicks are still in use in some vintage oil carts. Keep your variable voltage vape at a low voltage to avoid dry or burned hits if you’ve got one. Staying in the 2.5-2.8 volt range is ideal. To use greater power without risking burning up your oil cartridges using newer cartridges, such as CCELL, which utilize current wicking technology. Up to around 3.3 volts, they can usually be used.

Ceramic coil systems in certain oil carts may need higher voltages than typical in order to produce a pleasing puff. Start at roughly 3.3 volts and avoid exceeding 3.6 volts to avoid a burned taste in your mouth.

The battery life capacity expressed in milliamp hours (mAh) varies from one 510 thread vape battery to the next. For the most part, larger mAh means longer battery life for your vaporizer.

When it comes to vape pens, choosing a model with 510 thread is a good strategy. Which vape pen you would choose? I hope you enjoyed your reading. Happy vaping!

Does CBD help with anxiety and how